Hi everyone! As most of you know, I had kidney surgery on February 13th, already 3 weeks ago, which I keep telling myself to bolster my mood about my recovery. My early February post – Surgery Hair and other random thoughts about the upcoming surgery – was a bit more positive about things than reality turned out to be.

Rest assured, my surgery was successful. But my naive idea that I’d be wanting – and able to – care about using my facial creams, dry shampoo, I even brought a book to read, was oh so wrong. Like I’d be living in nice, calm, feeling-great hospital surroundings after major surgery? Yeah, I was big-time wrong on that front! Which is rather funny, being that my husband predicted as much:

Husband: You won’t open this bag even once to use any of these products.

I’m still primarily in bed these days, as I still have two more weeks to go until the stent (tube) in my right ureter can be removed. This is so that the ureter – which was detached and then reattached around an offending blood vessel that had been “kinking” the ureter – can heal on its own. So all “liquid” runs from my right kidney through this tube into my bladder. The stent is attached with a hook-type thingy on each end in the kidney and the bladder. One wrong move, and ouch! I’ll leave it at that, but will share a pretty picture so you can see what I’m dealing with: 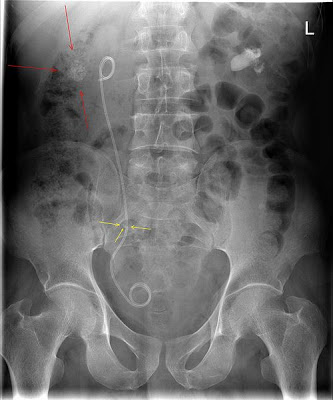 So long story short, mornings are mostly good, afternoons it starts to kick in, and by evening look out, the pain train has pulled into the station! I had to go back to the surgeon last week to make sure there was nothing wrong, as the pain was pretty unbearable. But this type of discomfort and pain is normal, so I pop the pain meds when needed and it at least takes the edge off. Well…that’s what the surgeon said. I’d say the Percocet more or less dulls the edge but doesn’t quite remove it.

You feel like you have to pee 1000 times a day. And it burns sometimes. And there’s a bit of occasional bleeding. Taking showers – actually miserable to do right now. Can’t lift anything. And they mean it. Because I lifted a simple plastic water pitcher the second week (not thinking) and tweaked one of the incisions badly.

I’ve got almost two weeks left until the stent can be removed. March 16th is the day and yes I am counting down the seconds until this thing gets OUT!

Oh yeah: my five incisions look like bullet holes all over my abdomen. I’m laughing as I’m typing this, so don’t feel badly about it. I haven’t truly ever seen actual bullet holes in a body, but I’m betting they look like these do. And no, I won’t share a picture and don’t need to see any pictures either. (But thanks for thinking of me!)

I’ve been catching up on reading – ordered some awesome craft books. Also reading Drood by Dan Simmons, a historical fictional mystery about Charles Dickens, which is a bit ghoulish in spots, thus creeping into my Percocet-induced dreams at times. The other night I dreamed I was pulling my tongue out of my mouth while chatting with friends and family at some sort of gathering. And it was graphic. And gross.

Hmmm. I can’t end this post on such an odd note. Let’s end with something good.

My husband has been taking awesome care of me. Our cats have been like two human water bottles snuggled next to me in bed. (Aliza’s “hole” she was scratching from stress is almost healed.) Oh – and my “surgery hair” was definitely the right move, because I still have no energy or desire to fuss with it at all. (And THAT is how you know I’m not 100% yet. Ha!)

I’ll share more soon. Typing on my iPhone isn’t the easiest thing in the world.

Oh – and most importantly: thanks and huge hugs to all of you for your emails, cards, care packages, flowers, prayers. These loving gestures have always seemed to arrive just when I most needed a boost.