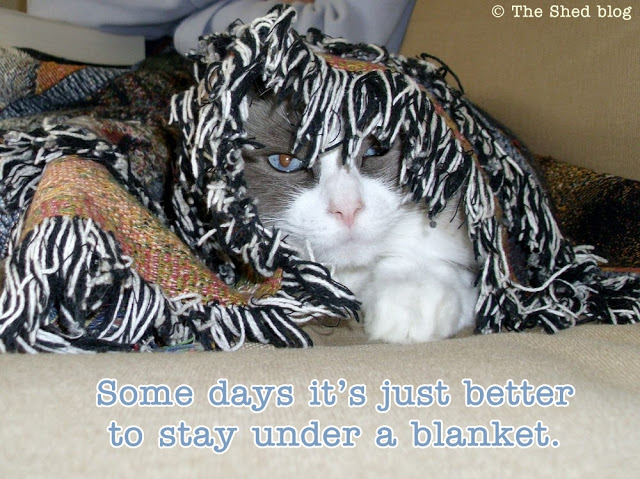 Last Thursday — even though I posted here excited to share my guest post on what I like to read — was my terrible, horrible, no good, very bad day.

Here’s the end of the story first: I’m fine now. Feeling like I’m around 85% of the way there. And feeling TONS better than I did a week ago.

So what happened? Where have I been?

Mostly taking Lulu’s advice and staying under the blankets!

Recently, I was put on a powerful anti-inflammatory drug, to see if that would help with some of the pain I’m experiencing with the bursa surrounding each hip. Um… yes it is called “bursitis” but since I think that’s an old person’s ailment, I will not be using that term. The drug – Voltaren – is an NSAID, same class as Advil, Aleve, Naproxen.

You know those commercials for various medicines on TV, where they say how great it is, and then proceed to list the 72 possible serious side effects that you could experience from that drug? Well, that’s what happened to me: I experienced a ton of side effects that were not pleasant and were not going away. My doctor was out of the country, so I spoke with his nurse and she agreed that I should immediately stop taking the Voltaren. The problem, however, was that I was in a horrible amount of pain in my stomach area. It felt like a combination of bloating, gas, cramps, and basically like the scene from the first Alien movie where the alien bursts out of the man’s stomach. (No, I’m not including a link to watch the movie clip on YouTube, because I just watched it and, although it is accurate for my description, it is rather gross to watch.)

Anywhoo – long story short, although I stopped taking the meds, the stomach pain continued and did not decrease. After about a week of this, my husband finally said, “You’ve got to get this checked out.” And he was right. I was so hoping the pain would just go away, but even I had to admit defeat. So off we went to the Emergency Room, and although it took 10 hours of our lives, the doctors and nurses there were awesome and figured out what it was: the drug was eating away at the lining of my stomach. Any acid that was produced from food and liquid intake was then attacking my stomach where the lining was either thin or possibly not quite there anymore. And even though I had stopped taking Voltaren, I was taking Aleve to help the pain, which only continued to make my stomach worse.

I’ve been on a primarily liquid diet, just soft foods like yogurt, bananas, nothing that will cause any acid to occur. Meanwhile, I’m taking Pepcid to help the stomach lining heal, and I’m back on the pain meds that I used to be on, which is just fine by me. And no more NSAIDs ever. Just Tylenol. I should make my own commercial.